Given an array $A$ of numbers, find a permutation of it so that the array’s elements are monotonic in its indices.

Sorting is a classic algorithms problem that has been extensively explored by various authors some of whose approach to the problem is truly novel and path breaking.

Each of these has their own special property that interests me leading to inclusion here. By default we will be talking about sorting in ascending order since deriving the opposite is usually a simple change of ordering comparisons.

Small aside on selection sort

There are other simple algorithms like selection sort whose primary focus is that after the $i^{th}$ iteration $A[:i]$ will never change. i.e. it already contains sorted elements in the correct order.

Selection sort is obviously extremely inefficient, so I’ve only written this because I tend to forget the difference between selection and insertion sort after years of studying CS, because they’re both algorithms that rely heavily on swap and the initial subarray $A[:i]$ is sorted for both. Just that insertion sort is stricter in specification saying that $A[:i]$ must be sorted and never change after the $i^{th}$ iteration.

With insertion sort the key idea is to remember how it operates:

Thus the name insertion sort. Each iteration it is trying to process a single element by trying to insert it into aan already sorted array.

Why is Insertion sort special? Read the wiki page to see it has some interesting properties like being stable, online, in-place. One more important property is that it will make fewer modifications if the list is almost sorted or sorted.

It is also more efficient than most other $\Theta(n^2)$ algorithms so its useful to have it as a bottom layer sort for small arrays in a hybrid approach where large arrays are processed by efficient algorithms and smaller segments are sorted by insertion sort which is better in this regime of array sized.

Another useful example to remember about this process is how a deck of cards may be sorted by hand. You start with the top card and keep picking up single cards from the top of deck and inserted them into their correct places in the “sorted deck”. The sorted deck has elements in the right relative order but not all of them are in their final places.

The key objective is to sort smaller and smaller segments of the array called runs and merge these together into a larger sorted array. Since it is possible to merge two sorted arrays into one in linear time if variable extra space is allowed we have a sorting algorithm performing at $\Theta(n \log n)$ time complexity.

Merge sort is also stable, although it is not in-place (since we require an array of size $\Theta(n)$ for temporary storage). It generally outperforms quicksort, performing fewer comparisons but requires more memory. Read more here.

Like merge sort this is also a divide and conquer algorithm, but unlike merge sort majority of the work is done at the divide step. The combine step is essentially free here. Quicksort repeatedly partitions an array in a special manner and combines these recursively partitioned segments into a sorted array.

To get droll facts out of the way, quicksort is in-place, it is not stable. Performs better than merge sort practically due to having spatial locality of reference, utilizing caches better.

The partition routine’s sole job is to select a pivot element $x$, any element and arrange the array so that all elements smaller than $x$ are to its left and all larger are to its right. Here’s an image illustrating the process of pivoting an partitioning: 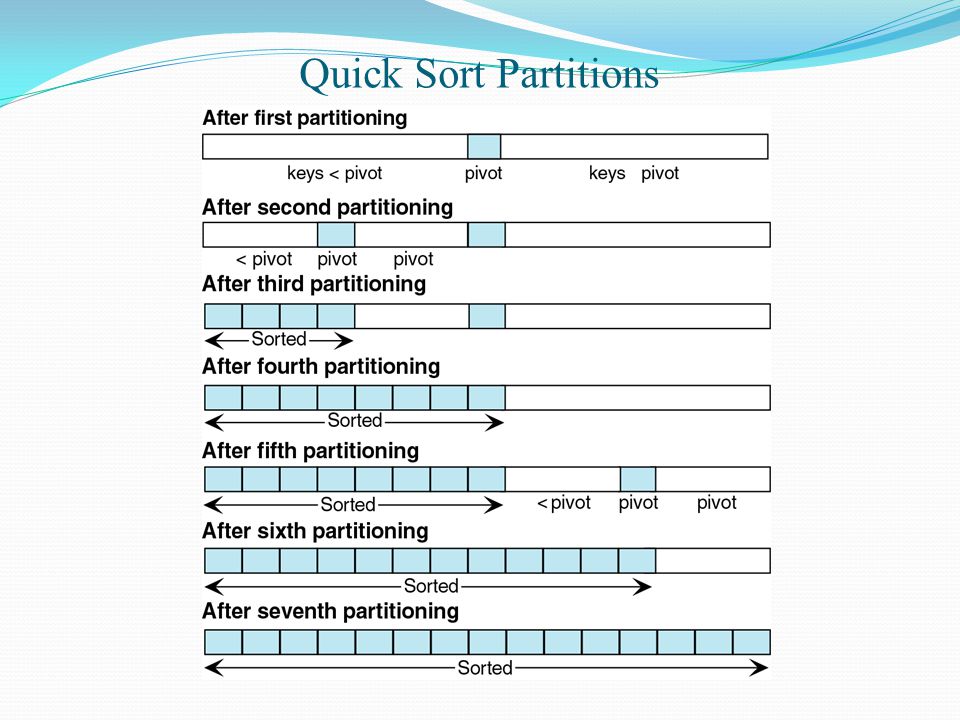 Some questions to ask yourself about the partitioning routine:

Is partitioning $\equiv$ sorting? No, partitioning only ensures that after its done, the selected element is in its correct place (where it would be after we’re done sorting the array)

How are these two ideas related? Think of a sorted array $[1, 2, 3, 4, 5, 6]$. The usually definition of a sorted array is one that was mentioned at the beginning of this essay, here’s another equivalent definition, which may help you connect the dots to the idea behind quick-sort, but first a definition (note that this can be defined the other way around too, but then we’d be dealing with descending sorts)

This is just what the partitioning function does. It picks an element and ensures that it is ordered. This is then done recursively over the array with a divide and conquer strategy because linearly partitioning from left to right would be $\Theta(n^2)$ and end up in a lot of repeated data moves. divide and conquer ensures that elements are not shuffled repeatedly, resulting in a performance gain.

Heap sort is a special sorting algorithm that has a lot of desirable properties including being our first efficient partial sorting algorithm so far. As a reminder, being able to partially sort means we do not need to run the whole algorithm to find out say the $5^{th}$ largest element. This is useful for performing order statistics , priority queue implementations on dynamic sequences. There are better techniques to do the same for static sequences (OS-Trees!), but those are for a later discussion.

Heap sort is similar to selection sort, in that we find the extreme (min) element first but move to the tail of the array. Another key difference is that we are smart about selection here, the input array is heapified, i.e. arranged in a special way so that finding the extrema is a $\Theta(1)$ operation.

A heap is an array that can be viewed as a nearly complete binary tree with each tree node having a corresponding array element. This below is the relationship of array indices wrt their relative positioning in the tree ($0$ indexing, with $0$ as root node)

The kind of heap we are dealing with for creating a sorting algorithm is a max-heap (min-heap for descending sort). In addition to the above three, a max-heap also obeys:

So in order to sort using something like this, we need to do the following

buildMaxHeap We start at the middle of the array because of how the heap indexing works(roots to the left will have children on the right half), starting at n - 1 would end up processing elements twice and lead to incorrect heap creation.